My legs gave out, and I slid slowly to the ground. I held on to my bruised shoulder, sitting against the wall to catch my breath. I didn’t know how to comprehend what had happened. It was like it was out of a horror movie. The hooded figure…Victoria…Alive? Dead?

I could hear Teresa’s muffled voice along with a ringing sound. I tried to shake myself back to the present. “Detective Roe? Johnny! Can you hear me?” Shouted Teresa nudging me softly. I slowly looked up at Teresa. Teresa brought out a miniature flashlight and peeked at my eyes. The flashes of light woke me up. I felt wetness down the side of my arm. A tingling sensation on my neck traveled down to my shoulder.

A commotion surrounded me, echoing footsteps and radio sounds in all directions. I didn’t know what to focus on; my bleeding or the body bags being dragged by. “Can you stand up?” Asked Teresa, holding a piece of what looked like a torn piece of cloth on my neck. I nodd, losing balance immediately. “Here, let me help you….” Teresa says, grabbing hold of my good arm and boosting me up on her shoulders. I laid my weight on her. When we stepped outside, the sun instantly blinded me. Teresa stopped us for a second and slipped on my sunglasses for me. I was about to ask her what had happened; What did she and the others find? Was Victoria really back?. Before the words came out of my mouth, Teresa interrupted me and said,” We’ll talk about it later…keep quiet. I’ll meet you back at my place after we are done here…who knows how many bodies are down there…”, Teresa whispered as we walked through a line up of police vehicles. I wanted to rebel against her request, but I knew Teresa was right. Who knows what the public would think if the press got one hint of what was truly going on. It would turn into a conspiracy mess; nowadays, people love conspiracies. There was a ton of press waiting and filming as the bodies rolled out. A few phones are out recording for their own personal use. A few police officers were trying to block them from crossing the yellow tape lines.

I recognized a couple in the crowd, Ruby and Tom Bouse; Ruby fed me while my mother had her weekly mental breakdown. Trudy Bouse, their daughter, who would be turning 24 this year in May, went missing a couple months ago. While looking at the files of the missing person reports assigned to me, I reached Trudy’s report, thinking it wasn’t the trudy I knew. It was Trudy…

Trudy loved doing puzzles. I remember the first dinner I had with them. Ruby and Tom were laughing and giggling in the kitchen, shuffling pots and setting the dining table. Trudy sat in front of the tv with her puzzles. I walked in and sat on the couch, slumped over, brooding about my life and how hard things were going. Trudy was 10 at the time; Trudy walked around with her bucket of puzzles, “wanna help me with my puzzles?” Asked Trudy, smiling at me. Tom called us in, and we sat down at the dinner table. Looking around awkwardly at their smiling faces, I couldn’t help but envy them. They were happy, together…I also felt honored to be there. I tasted Ruby’s mashed potatoes and couldn’t hold the tears slowly pouring down my face. Ruby and Tom got up to hug me. Trudy dropped her fork and ran over to us, squeezing into a tiny crack between Ruby and Tom to hug me. “It’s okay to cry…I cry all the time…” Admitted Trudy, whispering softly. That night was the first time I felt like I wasn’t drowning.

“Get back! This is a crime scene! No one is allowed near here! Please go home!” Shouted an officer, frustrated.

There were a dozen police vehicles outside and a few EMTs. I looked around and saw a few pedestrians behind a yellow tape, watching as they kept pulling what felt like more than 20 bodies out of the entryway of the Factory. I overheard the Chief talking on the radio as I walked by. The Chief gave me an acknowledged nodd and went back to yelling into the radio. “No one is going home until this entire place is searched. No one goes alone! I repeat! No one goes alone!”. Shouted Chief Rainer, wiping sweat off his tanned skin. The Chief got to know my father very well.

My mother called the cops on him so many times. My father would punch holes into the wall near my mother’s head. There were times it sounded like he hit her. But my father never touched her. Then, a woman showed up at our house, demanding to see my father. When my mother asked why the woman confessed that she was pregnant, she wanted compensation for an abortion. My mother didn’t know what to do or say. She stood there in the doorway, looking back at me. Her face was only described as if someone had told her that a family member had died overseas. That night, when my father came home from work. My mother requested that I stay with Ruby and Tom for the night. I don’t know what exactly happened. But I overheard Ruby talking to Tom about the police being called because of a domestic disturbance.

Teresa led me to the nearest available EMT van, setting me down slowly on the stretcher. Marylyn was the technician attending. She looked around cautiously, nervous. “Marylyn, I need you to take a look at Detective Roe,” Teresa said sternly. Marylyn nodded and began gathering her medical tools. “Do you know where it hurts?” She asked, looking me over. Marylyn’s hands shook nervously. “Are you able to take your jacket off?” She asked as she looked down. Voice cracking. The Van was located west of the Factory. I looked around, taking my mind off the pain from Marylyn’s poking and picking. “Were you attacked by an animal? I don’t think I have the qualifications to give you a rabies shot?… I could drive you to the hospital….” Marylyn said, dabbing antiseptic on what looked like claw markings of a big dog.

I looked down at the claw marks carved into my shoulder,” I can drive myself. Just clean it up and put a bandaid on it…Please”, I asked politely, unconcerned. I finally made eye contact. Marylyn had green eyes and a buttoned-up nose hiding behind her thick black glasses. She adjusted her glasses for the fifth time and immediately looked away. “What did you see down there?” I asked, lighting a cigarette to ease my nerves. I could tell she was very traumatized. There was a long pause before she responded to my question.

“…There were piles of them scattered all over…I never thought I would see that type of brutality…The barbarity of a human…How can someone do that to anyone…to even harm a child…There were elderly, and I saw the man I always said hello to every morning on my way to work. He said hello back…And to see him pulled apart like a ragged doll!….” Marylyn said, pausing, shaking, and crying. “You don’t seem surprised?…” She asked, wiping her tears away.

“I’ve seen it before…A year ago…Also I didn’t think we were dealing with a man…or woman…I think we are dealing with a thing….” I said, taking in a couple puffs and blowing it out. The scratches on my shoulder began to pulsate. As I gripped my shoulder, I looked up, and Victoria was standing in front of me, smiling. I grabbed my gun and pointed it at her. There were so many people around. Why would she come out, I thought…She burned from…the sunlight. I thought.

Marylyn tapped me on the leg,” Are you okay?” she asked, concerned. She Didn’t seem to notice Victoria standing in front of us.

Victoria grinned wider than ever,” Don’t worry…She can’t see me… I’m in your head…remember?…” Said Victoria.

“Yeah, I’m fine. Thank you…” I say, putting my gun away. I stepped outside and started walking towards the entrance of the Factory. Marylyn didn’t seem like the type to like confrontational situations or any interactions at all. She seemed very shy and timid when we first arrived. What she saw down there in the basement of the Factory definitely screwed her up. If it’s related to Camp Eve, there are probably more than 30 bodies.

“Wait! Here…for the pain….” Marylyn says, handing me a bottle of pain medication.

I slipped the meds into my leather jacket. I walked over to my car, grabbing a flashlight from my back seat. As I stepped out, Teresa was arm-crossed. “Why aren’t you at the hospital yet?” Teresa asked, disappointed and frustratedly.

Victoria sat on the hood of my car, “I think she likes you, Johnny…”. Victoria says, giggling. Victoria flipped her long gray hair. I looked at Victoria annoyingly.

“Hello? Earth to Detective Roe…?” Teresa said, looking at the hood of my car and back at me, confused.

“I’m going down there…If this is connected to Camp Eve, then I need to go down there…I need to find Victoria….” I say, moving closer to Teresa, determination in my voice. Victoria stood behind Teresa, twirling Teresa’s hair with her black-tipped, sharpened hand.

Victoria smiled at me, amused.

Thank you for Reading! 🙂

Published Author- Grew up on Maui-Love to write and Read- Three lovely children-Married-Creepy things enthusiast, Manga, Zombie and anything really not of the norm. I love that blood and gore stuff. [I hope you like my stories- I work really hard on them, so please follow and like for more! If you like the scary and sexy, This place is for you!.

Warning! Adult Content! Warning! 18+! By Leilani Raven Katen Eve Of Grim-Chapter Eight(Parts 4 & 5) By Leilani Raven Katen Detective Roe (In-Between) I looked around to see if there was a path nearby that I could take. Suddenly a way opened up, shifting trees and its roots moved out of the way, creating a […]

By Leilani Raven Katen Warning! Adult Content! 18+ Eve of Grim-Chapter Eight (Part Three) By Leilani Raven Katen Detective Roe (present day) “Bullets don’t hurt them, not even the standard zombie killing,” shot to the head,” trick,” I whispered to Santos and Teresa. They looked around for some ideas while watching where the zombies were. […]

If you do not change direction, you may end up where you are heading. 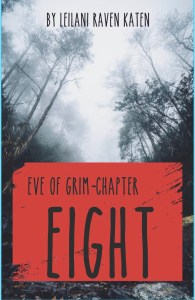